The Birdies are Fine!

Hello Birdie Blog friends,
It's been way too long that I have posted an update about "First Birdie" and her siblings, "Boy" and "Girl". 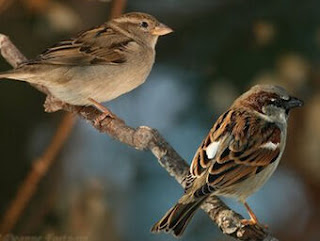 Not them, but almost exactly what
Girl (L) and Boy (R) look like

Just to recap, First Birdie fell from her nest Spring 2013. She was probably only a day or so old, as she didn't have any feathers, her eyes were closed, and her fall from our porch roof eave nest injured her neck, so I never thought she would survive and thrive as she has! She and I learned together how to feed her, and raise her into the "perfect" female sparrow she is today, 7 years old now! She is in her own condo cage, and periodically I let her out for fly-abouts, but I really don't want the poopy trail in areas she flies. Really not that much poop though. She hangs out around us, flies through the kitchen and likes to sit on things that show her reflection, like the water dispenser on the refrigerator, of all things! She's super healthy, her feathers are perfect, and she loves to be hand fed little treats such as biscotti, eggs, fruit, bread.

A year and a few months later 2014, another newborn sparrow fell from the same nest. We put the baby back in the nest, but out she came again. I realized there were 2 other babies in the nest, and just couldn't let nature's fate let them fall again, so I brought them inside and raised "The Triplets". Turns out there were 2 girls and a boy. It was so interesting watching them grow and mature and see the male sparrow darker color points come out. I bought a large Aviary type cage for them, and all seemed fine.

Well over time, Boy became a "typical male" and began wanting to court and mate the females. Sadly with being enclosed in a cage, however large it was, the girls couldn't really escape his attention and antics. One of the girls wound up more pecked on then the other so I separated her in her own cage. Sadly, she stopped thriving, and died a few days later. Makes me so sad he picked and pecked on her so much, and I didn't separate them sooner, but I always lean to following Mother Nature, and how things would be in the "natural environment". That was several years ago, and things seemed ok with Boy and Girl in the large cage until recently.

So here we go again, Boy pecking and picking on Girl to try to court and mate. I felt so bad for her, as he pulled her little feathers out on her head, trying to hold her down to mate. Of course in the wild, uncaged environment, she would fly away, and do fine. So I took her out of the big cage, and separated her into her own cage. It's been several months, and they are doing fine. It's "funny" seeing Boy court her through the cages, but not able to get at her. I know she is Very Relieved! Happily all 3 birdies are doing just fine, and thriving. They sing and chatter all the time, often to an "annoying" point. The more voices in house, the louder they get. Singing along to all our voices. They are especially chatty when I'm on the phone, to the point where the person I am on the phone with, thinks I'm in a bird aviary, zoo or the Rainforest.

Be right back, going to add their pictures for you... 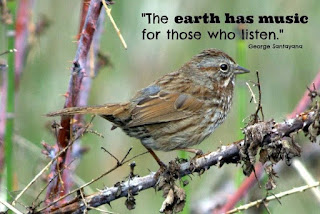